Black Fleece Beanie with Silver Symbol Symbol Name: Maltese Cross Represents: John the Baptist Symbol History: The history of the cross dates to the 11th century and is attributed to an order of monks dedicated to St. John the Baptist. The monks took vows of poverty, chastity and obedience and ministered to the sick and weary pilgrims of all faiths who visited the Holy Land. The order selected the eight-pointed cross to represent the eight beatitudes from Christ's Sermon on the Mount. The four arms represent the four theological virtues: Prudence Justice, Temperence, and Fortitude. The cross became known as the Maltese Cross when the order relocated to island of Malta, becoming known as The Knights of Malta. The symbol is used to represent St. John the Baptist, and is depicted as a silver cross on a black field. Today, the Maltese Cross is also frequently used as an emblem by firefighters. 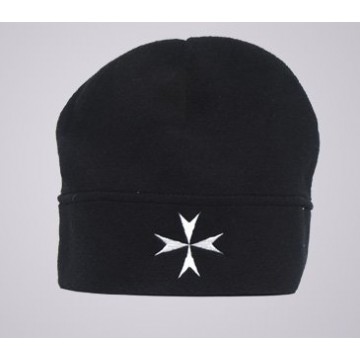