Navy Blue Fleece Beanie with Light Blue Symbol
Symbol Name:Fleur-de-Lis Represents: French Christians, The Virgin Mary Symbol History: The Fleur-de-Lis has long been recognized as the royal symbol of Christian France. It is worth noting that the lilly flower contrasts significantly with the other armorial emblems of European royalty, such as the lion and the eagle. The symbol is also ascribed to the Virgin Mary, and the three-fold nature of the petals have been used to represent the trinity. Joan of Arc famously carried the Fleur-de-Lis on her banner during her victorious march against the English in favor of the French Dauphin. 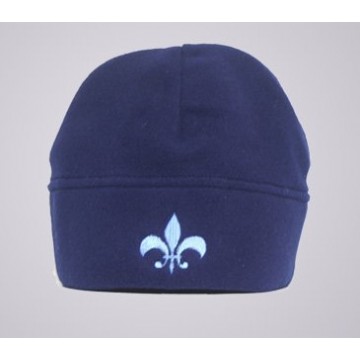